I got tired of card games where the only funny things said were things pre-written on the cards, so I created Dysfunctional Families.
— Eric Shefferman

Dysfunctional Families is a card game for 3 to 10 players. Game time about 45 minutes.

The game is loosely based on Happy Families, a traditional card game from the 1800’s similar to Go Fish!.
However, Dysfunctional Families has some very un-1800’s twists.

The original Happy Families was about collecting cards of families with traditional occupations such as the Butchers, the Bakers, and the Candlestick Makers.

Dysfunctional Families includes families like the Arsonists, the Drug Dealers, the Mad Scientists, and the Zombies.

Gameplay involves asking other players for cards so that you can collect complete families – father, mother, son, and daughter. Whenever you ask for a card, you have to do a little bit of improv by filling in the sentence

This is a simple structured improv where all that’s needed is filling in the “because” — so it is easy for players to catch on — yet because of the Dysfunctional Families, it can bring out some wild sentences. These both serve to keep the laughs going as well as help astute players remember what cards the other players are trying to locate.

NOTE: This is what makes the game so different from Cards Against Humanity and all of the CAH clones — instead of reading something funny off a card, the players are bringing their own humor (and acceptable amount of vulgarity) to the game. Thus Dysfunctional Families takes on the “flavor” of the group playing it — and is different with each different group that plays it. The card graphics are very minimal so as to suggest basic ideas, but not to pigeonhole players into saying the same tired things every time. — Eric Shefferman

I’m looking for the Arsonist because I have some inventory that needs to go up in smoke.

I’m looking for the Arsonist’s wife because I want her flambé recipe.

I’m looking for the Arsonist’s son because the Boy Scouts don’t know how to start a campfire.

I’m looking for the Arsonist’s daughter because I need a hot prom date.

There are also Power People cards. These cards cause players to reveal information or cause cards to move around. Applied skillfully, they can be used to determine who is holding the cards you need or to mess up the hand of a player who is doing too well.

Game night is all about the fun and humor of face-to-face time with your friends. The game is just there to facilitate that.
– Eric Shefferman

Video with a different group of people playing (notice how the tone of the game changes to suit the group): 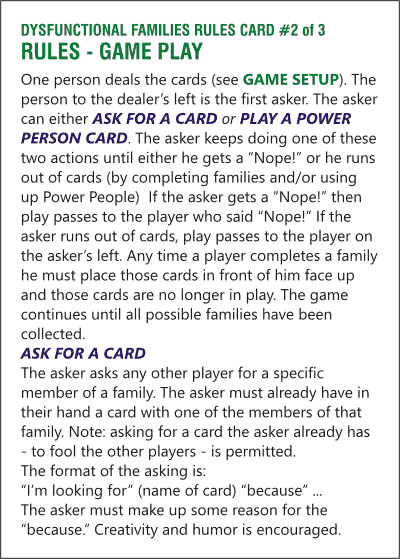 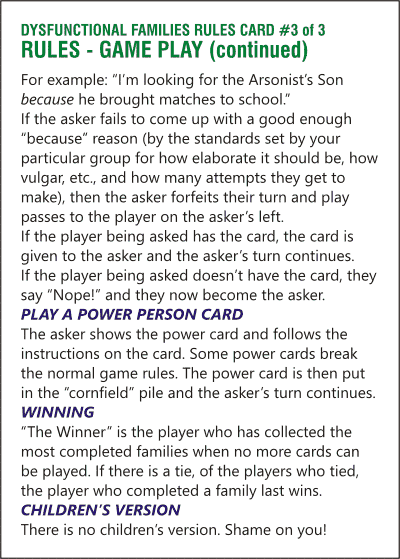 Sign up for the email list to get all the updates and a free Print and Play copy of the game!

And you’ll be able to get a full-color printed copy of the game from the Kickstarter campaign!